Earlier today, I managed to pop into Second Life (better known as SL) and got a sneak peek at a friend's new mermaid and fae sim, Elementals. The picture below is of the fae mall my friend Leannsidhe designed and built with with help of the highly talented Strand Starsider. Pretty cool, huh. They never taught this kinda stuff back when I was in college going for my degree in fine art! I wish they had, I would understand more now and be better at building. :) As it is, I can barely manage building a box! rofl.


I was lucky enough to secure a spot underwater at her SIM with a poster/billboard of both my and Cora *Waverider* Zane's book cover art, along with a gumball machine that gives out neat little prizes for a small donation of $10L. :) Drop by the next time you venture into SL and check it out: http://slurl.com/secondlife/0%200%20Meleda/90/96/1

I stopped back by tonight for the grand opening of the Elementals sim and their nightclub, La Siren. The special treat was a total surprise. I got to listen to this incredibly talented singer and songwriter, Euterpe Queller. Her range is amazing, singing everything from jazz standards to blues, and modern pop.

Her website says:
As the Second Life persona of Oklahoma City
songstress, Shelly Phelps, Euterpe Queller is
alternately categorized as a sultry rhythm andblues chanteuse, a torchy jazz singer,
a thoughtful singer songwriter, or the
quintessential rocker chick. However, all
agree Queller's ever-present smoky and
soulful voice croons, moans, belts, and wails
its way through every song.
Check it out at: http://www.shellyphelps.com/EuterpeQueller.html

She reminded me so much of Vivilyn Ondine, the siren/mermaid heroine in my second book in the Shifting Tides trilogy. All Viv wanted was to sing jazzy torch songs with the boys in the band, but her parents forbid it, thinking it beneath her as a royal heir, and also dangerous to be let loose in the human world above.

After Ms. *Queller* Phelps set, a rock DJ dressed as an Orca Sea Wolf (lol) spun tunes and took a special request from moi—May It Be - Enya. 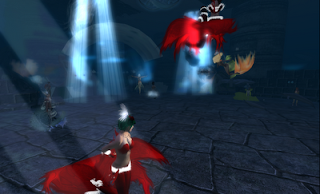 As you can tell, it was a very fun gathering with some awesome music at the nightclub La Siren.

I also got to reconnect with my bff Jan aka Bryn Forsythe in SL after the party. I hadn't seen her in a while since she moved back to Indy. She's the one who introduced me to Second Life, and the craziness of virtual reality shopping, so the damage to my bank acct. is all her fault. lol.