The winner of my seashells, dolphin windchime & a copy of my ebook, Soul of The Sea is...
Estella!

Congratulations, Estella!
Please email me at cass@ cassandracurtis .com with your format preference and your full name and mailing address so I can send your goodies!

Thanks to all who entered my Sea Magick Contest.
Posted by Cassandra at 12:29 AM 2 comments:

Seashells From The Sea Shore


While I was in Florida, I walked the beach and collected seashells. A few were conical shaped, but not brilliantly hued. I learned that most of the seashells they sold in the shops were actually from Indonesia and the Philippines. I'd love to visit there and simply walk the beaches and collect some of those shells. They're so beautiful.

I also did some meditation, even said a few prayers. Lightwork never ends. :) The ocean is so healing and magical. I always feel revitalized after spending time by the sea.

Seashell magic
You can experience the magic of the sea right at home. Take a few seashells and scatter them in a circle around a blue candle. Add a little sand to your circle if you have any. Notice the patterns and whorls on your shells, the way they repeat and go inward. Breathe deep. Now focus on the candle's flame and then close your eyes. Picture yourself by the seashore, picking up those shells, letting the sea spray mist your feet, legs, and arms. Hear the rolling waves as they come ashore. Can you smell the suntan lotion? Feel the warmth of the sun on your face?

Ahh, I think you can! Once the picture is complete in your mind's eye, ask for nature's healing gift from the sea. The words need not rhyme, only be heartfelt. Now snuff the candle. Do this sea magic exercise anyime you feel stressed or tense.

To help you along, I will send one lucky winner a bag of natural seashells along with a small magnetic dolphin wind chime, and a copy of my ebook Soul of The Sea. To enter, leave a comment here on my blog. Contest ends Wednesday, September 29, 2010 at midnight. I'll announce the winner later this week. Good Luck!
Posted by Cassandra at 9:29 AM 4 comments:

I'm back from my trip to Florida and although I had a great time, I am tired and tuckered out. Whew-wee, ya'll. That is one long damn road trip. I swear I never realized Alabama was such a long state! When I wasn't helping my sister decorate her new condo, I was playing mermaid in the swimming pool. :P

The good news for all is that I managed to find some cute stuff for the MMC Paranormal Trick or Treat grab bags this October, so you'll want to enter all the contests next month for your chance at some way cool prizes. :D  I also plan to have a few contests here at my own blog. :)

I got to catch up with some of my old pals in Navarre Beach, Panama City Beach, Destin, and Tallahassee! ::waves::

The shark feeding place was closed when we got there, but it still made for a cool picture, don't you think? :)


More later, but now I have to finish unpacking.

Until next time,
Cass
Posted by Cassandra at 7:05 PM 2 comments:

Sitting at the poolside in a cabana and checking emails, this is the life, ya'll. Woot!
Went to this amazing little restaurant yesterday. Ate fried grouper and fried pickles. Yes, you heard me right. Fried pickles. Awesome. You have to try it. I am freckling nicely from the sun, lol. Now if only I could find a cute guy ...to connect the dots! :D

My sister loves to tease my guy and told him the other day that we were going to Wangers. When he asked what that was, she said, "It's like Hooters, only it caters to women." OMGawd. He was none to pleased. lol. Of course, there is no Wangers and she made it up, but he's totally fished in, so I bet he's searching the net as I type this. rofl.

I would upload my pics and share, but I am on a borrowed laptop and am clueless how to connect my camera and do that on my niece-in-law's laptop, so that'll have to wait until I get back home. In the meanwhile, ya'll will just have to imagine all the sights and sounds, and fun. Wish ya'll were here to join in.

With my mum safely cared for at the physical rehab center for the next few weeks, now seems an ideal opportunity for my sister and I to take that Florida trip. I've promised not to drive too fast (one of my old nicknames was *leadfoot Louise*) and she's promised not to fall asleep at the wheel if she drives (one of her nicknames is *snoozie Thelma*). lol.

No laptop or computer access, it will almost be like a time trip back to the 70's. Nothing but open road and fast food, tourist traps and road maps. I hope to have lots of cool pictures to share with my readers when I get back. ((hugs))


Now ya'll behave while I'm gone and don't do anything I wouldn't do...lmao.

When I first explored Second Life, one of the things I found most intriguing was the ability to custom create and develop the look of your avatar, down to the way it smiles and what type of nail polish and hair style it wears. My idea was I could create an avatar based on the loose descriptions of my characters. This way I could get a better handle on them as I write their personalities and add more depth and detail to bring them to life in my stories.

Amid deadlines and family issues, I lost track of that idea and am now giving it another try in Earth to Elena, my sci-fi/paranormal romantic comedy.

Elena Hendren is an inter-galactic traveler and former thief, stuck hiding out on planet Earth. Her former partner-in-crime, Darius Maelstrom, is part con artist, part muscle, and all bad boy. Together, they were the alien version of Bonnie and Clyde. Elena and Darius were forced to go their separate ways when the interstellar patrol chased them through a rift in space/time. Now, six years later, he's finally found Elena again.

Given that basic bones description of who and what Darius is, I imagine some of you are picturing him a certain way, despite the fact I haven't mentioned his hair color or eye color or general body build. This is where developing an avatar look in SL is so helpful. I can try out various hair styles and colors, eye colors, body shapes, skin tints/colors, and other details. And I haven't begun to touch on clothing and how creating a signature style for your character says a lot about their personality!

Here are a few pics I took of Darius, trying to create a visual representation of what I saw in my mind's eye when I pictured the hero of my story: 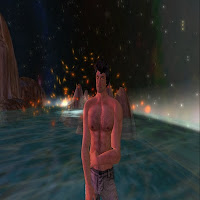 I took this pic to show not only Darius with his shirt off (to see his basic build) but also some of the backstory setting—his home world of Azuropa. 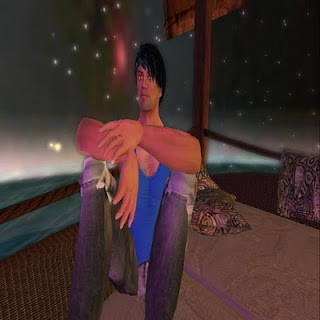 
I also played around with hair styles and other elements, but decided from the very first, that he had dark hair and cut somewhat short—but not military short.

I can see I'll need to work on his clothing some more, although I do like what he's wearing and will probably have him in jeans most of the time he's on Earth—well, unless he's outta them. ;-)
Posted by Cassandra at 11:01 AM 3 comments: