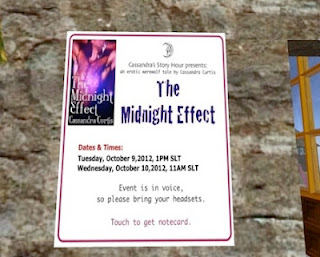 More events have been added to the schedule for my Paranormal Party Palooza.

For all dates and times, refer to the event calendar on my website's home page. 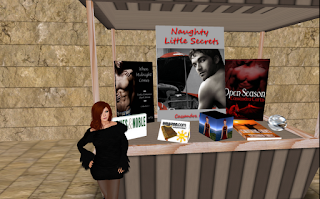 Check out my new booth at the Terric sim in Second Life. http://slurl.com/secondlife/Terric/66/162/25

Touch the spinning red and blue box on the table and you'll receive wicked awesome dragon tats and a cool red tank top with the cover art from Open Season. While there, stroll up the stairs and listen to some cool jazz in the Starlight room, or wander over to Netera's Coffee Lounge for live interviews with musicians, poets, and authors, and hear them play, sing, recite poetry, or tell stories in voice.

Have you ever noticed how difficult it is to find creative commons, free photos of beefcake? I've been scouring the web, checking out what's available and ladies, I'm asking "Where's the Beefcake?" I'm gettin' desperate and even debated taking pics of my guy, but he nixed that pretty fast. lol.

Why, I'm even thinking of starting a site devoted to free beefcake for blog use only, something we can slap on our humpday hotties blog posts. Hmm, now all I need are a few handsome guys willing to show some skin for fame and glory across the romancelandia blogsphere. Any takers? No?

Then I'm forced to do this:

Hope you enjoy your weekend,
and that's no bull. :p

Posted by Cassandra at 10:17 AM No comments: 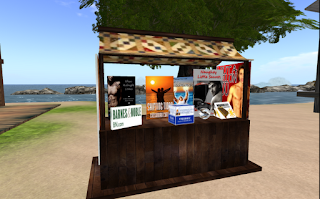 My friend and social media helper Jan spotted a new classic rock club last week during her last visit exploring SL, and grabbed a booth there to promote my books. The club's grand opening is tomorrow at 5pm SLT. Not sure I'll be able to make it in for the fun festivities since I am pushing my already extended deadlines on two books, but I hope if you do visit, you make sure to touch my freebie box of goodies and enjoy listening and virtual dancing to the cool rockin' sounds. 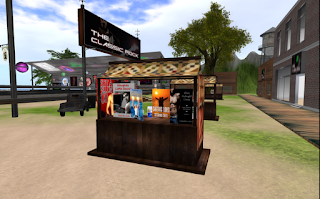 I wondered at Jan's reasoning for renting a booth at a classic rock nightclub and ya'll might too. She said it was perfect for a tie-in to some of my book titles, which include Black Magic Woman (Carlos Santana) and I Put A Spell On You (CCR). Girlfriend does think outside the box, gotta give her that. lol. 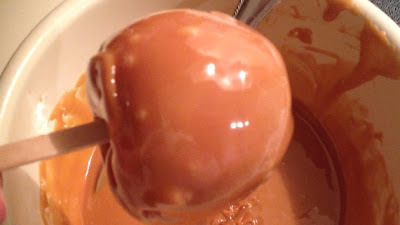 With the change in seasons and the temperature dropping to reasonable levels after an intense spring and summer, it feels good to get back to some of my favorite activities, like making toffee or caramel apples. We made some last weekend and they went pretty fast. I bet your family will enjoy them too.


Line a baking sheet with non stick foil, non-stick side up. Wash and dry apples, and then take a popsicle stick and insert in top of apple. Set aside. Take a microwave safe bowl and melt unwrapped caramel pieces in bowl for 1-2 minutes, depending on wattage of your microwave. Remove bowl with oven mitts and stir with large spoon. Caramel should be slightly runny.

Dip and Twist apple in melted caramel. If desired, you can then roll sticky apple in an additional layer of nuts* or whatever else you want. Place caramel apple on foil and let sit for ten minutes then serve. Apples can also be refrigerated for use later. Serves 4.

If you have a Second Life account, stop by for a free tarot reading from yours truly Sunday, October 7th at 1pm at the Pirate Bar at Morgan Straights Pirates Keep! http://slurl.com/secondlife/Pirates%20Keep/227/177/23


Until next time,
Have a great weekend!

I admit, I have a soft spot for zombies...and I'm sure that's the first place they'd go for in the event of a real zombie invasion. lol.  My guy has the game series and is a huge fan of the movies, plus he's gaga over anything 3D, including model turned actress Milla Jovovich, so of course this weekend, we went to see the latest in the Resident Evil movie franchise, Resident Evil: Retribution 3D.

In this fifth installment, written and directed by Paul W.S. Anderson, The Umbrella Corporation’s deadly T-virus continues to ravage the Earth, transforming the global population into legions of the flesh eating Undead. The human race’s last and only hope, ALICE (Milla Jovovich), awakens in the heart of Umbrella's most clandestine operations facility and unveils more of her mysterious past as she delves further into the complex. Without a safe haven, Alice continues to hunt those responsible for the outbreak; a chase that takes her from Tokyo to New York, Washington, D.C. and Moscow, culminating in a mind-blowing revelation that will force her to rethink everything that she once thought to be true. Aided by newfound allies and familiar friends, Alice must fight to survive long enough to escape a hostile world on the brink of oblivion. The countdown has begun.

As zombie movies go, it had all the usual suspects: zombies chasing gun wielding actors, shoot-outs, eating brains and various other assorted body parts, car chases and lots and lots of gore. What it didn't have was any emotion to the plot. Forgive me in advance for the pun, but the acting and the story felt very...dead. The CGI was outstanding and the make-up effects were wonderfully gruesome. The stunts were phenomenal. But it lacked something, an emotional content, or maybe I'm asking for too much? All I know is the best part (in my opinion) was the last 10 minutes of the movie. And nope, no spoilers here. But unless you're a hard and fast fan of the movie series and the games (like my guy, who loved the 3D movie), I'd wait to see this as a Redbox rental.

If you love zombies and want to rent a few of my personal favs, check out the following flicks at your local Redbox.

Later ya'll,
Cass
::taking off her popcorn diva movie hat::
Posted by Cassandra at 11:56 AM 4 comments:


I'm planning a wicked cool Paranormal Party this October and ya'll are invited. Most of the fun will be on my blog, on my Facebook, and on Twitter, but I'll also be at my good friends Eden Bradley, Crystal Jordan, and R.G. Alexander's Smutketeers website and blog (later this month or early next month). Also planning a hop to another friend, T. Sue Versteeg's blog. Lots in the works, so make sure and check back for updates.

Some of the Paranormal Party events this October will also be in Second Life for the fans and friends who follow me there. With that in mind, I've been hunting with my longtime friend and social media helper (gods knows I needed one, lol) for places willing to host various events next month in SL.

One of the things we have lined up so far is a free tarot reading event open to the public on a pirate sim in SL. More details on that later.

While scouting around SL for venues, I found this virtual gray tabby who followed me back to my merhome.

Since my place is 3/4 under the sea, I grabbed kitty so he wouldn't drown and hightailed it mer-style to the upper terrace above the water and sat kitty on my tarot table. 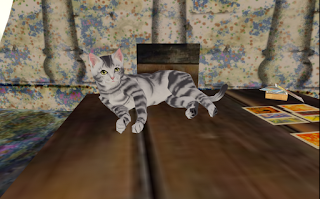 He seemed very interested in the cards, so I gave him a reading from my mermaid deck and my Rider-Waite. He seemed to enjoy getting his future read—probably because it involved cuttlefish and pink salmon treats. According to his reading, I think he's found a permanent home with me. lol

Until next time,
Cass

Posted by Cassandra at 9:00 AM No comments:


Whether it's sunny,
or it's raining wherever you are,
whether you spend the day
with family and friends,
or simply relax
and read a book,
have fun and enjoy
your day off.
Posted by Cassandra at 7:48 AM No comments:

The winner of my Twitter contest and the nifty daily prizes is... *drumroll*

Please email me ( cass [at] cassandra curtis. com no spaces)
with your name and snail mail address so I can send your prizes to you asap.

Please indicate in the email which gift card you prefer,
the Amazon.com card or the B&N online gift card.

More fun coming your way, so stop back by
and see what new trouble I'm stirring up in my cauldron o' fun.

Posted by Cassandra at 10:02 AM No comments:

Starting Tuesday, August 28 until Saturday, September 1, I will be giving away a swag bag of goodies and each day I'll add another neat prize. To enter, all you have to do is go to my Twitter feed Twitter.com/Cass_Curtis and either follow me, or send me a direct message and tell me the names of my two heroes in Soul of The Sea, the third ebook in my Shifting Tides series.


The first prize in the swag bag was a dolphin love button pin, a cool accessory for any dolphin lover. Wednesday's daily prize was a cute rhinestone dolphin necklace. Thursday's goody was a pack of mermaid nail art tattoos, Friday's addition was a $10 egift card good for either Amazon Kindle or B&N's Nook, and today, the final day of the contest, I'm adding a beautiful rhinestone blue barrette, like the one my heroine Dixie wears in my upcoming ebook, Sparkle: A Tale of The Shimryn.  Check it out: 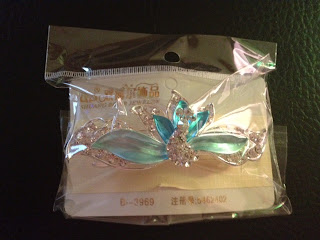 Enter now! The contest ends tonight at midnight! A winner will be drawn Sunday and announced here on my blog and also on  Twitter. Good Luck!

Must be 18+ to enter. The odds of winning depend upon the number of participants. Contest void where prohibited by law. I strive to make my prize winners happy! However, as with all my contests, it is the participant’s responsibility to check the blog to see if their name is announced as a winner, and/or to respond to winning notification emails in order to claim your prize.
Posted by Cassandra at 12:30 AM No comments: