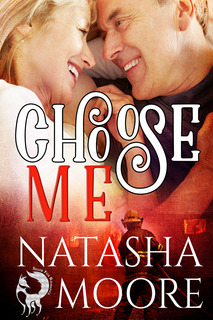 Eve Corcoran hates being a cliché, but after her husband leaves her for a younger woman, she’s surprised how much she enjoys being on her own. When the empty nester hires the contractor next door to renovate her new apartment, her surprising feelings for him threaten to turn her new life upside down.

After Rick Best lost his wife, he never expected to fall in love again, especially not with the mother of his daughter’s best friend. He’s gone on enough rescue calls with the volunteer fire department to know life can change forever in an instant, and he can’t understand why Eve resists grabbing a second chance at happiness.

Rick wants her to choose a life with him, but Eve is holding on tight to her newly-found independence. As she keeps pushing Rick away, however, being on her own starts to feel a whole lot like being lonely.

Time to grab a second chance at love. Book #1 in a new series Choose Me by @natashamoore http://amzn.to/2cNH56I

Posted by Cassandra at 12:00 AM No comments:

Fate couldn't have picked a worse moment to bring two lonely souls together.

Berserker warrior and drill sergeant Niall is being forced to retire from the Fenrir Army he's faithfully served for most of his life. Miserable and bitter, he's on the pack ship, waiting for a transport back to his home planet to be a farmer. Until trouble steps right on his prosthetic foot just as all Hel breaks loose.

Widowed Dagny is on the pack ship waiting for a transport down to Earth, searching for a new purpose in this next phase of her life -- one that isn't centered around her grown children. But her new plans definitely don't involve following a cranky old soldier into the dark to survive.

When enemy Axis powers invade the ship, blasting up the heat on a cold war, Niall and Dagny have to team up to save themselves and their shipmates, and to explore the lifescent that is drawing them together.

Together for now, but will fate be enough to keep them that way after the battle is over?