There's nothing quite like recovering from surgery, stuck in bed and offline. You find yourself contemplating the oddest things. Like if the wallpaper trim in the corner of your bedroom is peeling and how much tug it would take to pull it all down.

Or when they take the gauze off your eyes, if the doctor and nurses will all have snouts. I admit, that one kinda worried me.  I saw that episode of The Twillight Zone about fifty times growing up. Eeps!

The good news is I haven't seen a snout yet. The bad news is I have had the worst itchy feeling and because it's on the inside, I know rubbing or scratching around my eyes won't help make it go away.

On the plus side, I'm ready for Halloween. So what if I'm nine months too early. Not everyone can rock the goth look so well, and without make-up!

But the absolute worst is not being able to get on my computer and go online. Yes, I am sneaking on here now and will be in big trouble if I'm caught. I'm counting on ya'll not to tell on me. ;-)

Until next time,
Cass
Posted by Cassandra at 9:36 PM 2 comments:

Just got the cover for my upcoming ebook, Open Season and thought to share the news. My story is part of the DragonPax from Amber Heat/Amber Quill Press and slated to release on February 19, 2012. A very nice belated birthday gift to me. :)

I hope readers will enjoy the dark and dangerous tale of a submissive-in-training who falls in love with her very masterful dragon.
Posted by Cassandra at 9:53 AM No comments:

The Dragon Pax is Coming Soon

*happy dance*
Just received this in the mail and had to share! What do you think? My story, Open Season is part of the Dragon Pax, and will be available in February. Yay!

Posted by Cassandra at 1:43 AM No comments: 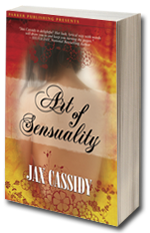 Books that are coming soon but aren't out yet will be noted, so you can get a *heads up* on ebooks and paperbacks to watch for in the coming months.


Art of Sensuality
by Jax Cassidy

Brought together by art, but does falling in love come at a price…or is it the ultimate masterpiece?

Art was not only a passion of Machiko Barrett, but also a destiny- a way of life she has known since her talent was discovered at 3-years-old. Caught in a turbulent storm of celebrity, scandal, and corruption, she disappeared from the art world only to re-emerge 15 years later. Her sheltered existence is disrupted when she is lured back to her one true passion: painting.

While she struggles to discover her own identity through her art, she encounters a man who opens her eyes to the art of sensuality, and awakens the woman buried deep inside the broken girl.


One of the most sensual books I've ever read! A must for romance fans!
~Cassandra Curtis, author of the Shifting Tides trilogy.

Coming in 2012 from
GrrlX Publishing

Features shape shifting pixies, and sensual oak men who use the promise of pleasure to lure their lovers to the Realm of the Fae.

Will be available at Smashwords, Barnes & Noble, and Amazon.com in both electronic and print formats.

Lyrical and enchanting, spicy and alluring, you won't want to miss Cora's spin on the Faery folk! ~Cassandra Curtis, author of the Shifting Tides trilogy.

Tempt Me
by R.G. Alexander

In the sultry heat of the Big Easy, desire can be a dangerous thing...

Gabriel Toussaint Giodarno has returned to New Orleans to make amends with his estranged family. The last thing he expected was to be hounded by a magical wannabe-guardian angel-or to be tempted by a beauty who's strictly off-limits. Angelique Rousseau has always lived a safe, uneventful life. But when her friend's twin brother arrives, Angelique finds herself drawn to him. Neither Gabriel nor Angelique is prepared for the intensity of their joined passions, or what the voodoo spirits have in store for them... 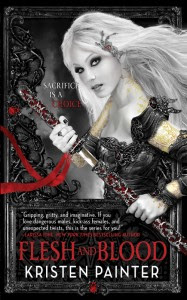 Sacrifice is a choice…

With the ring of sorrows still missing, and the covenant between othernaturals and mortals broken, Chrysabelle and Malkolm’s problems are just beginning. Chrysabelle still owes Malkolm for his help, but fulfilling that debt means returning to Corvinestri, the hidden vampire city neither of them is welcome in.

The discovery that Chrysabelle has a brother could mean reneging on her promise to Malkolm, something that might make him angry enough to loose the beast living inside him. And fulfilling her vow could prove devastating for Chrysabelle — especially when you throw in power hungry witches, dead fringe vampires, and the Kubai Mata.

Kristen's HOUSE OF COMARRE series is stunning, rich and complex with characters you won't forget and a storyline that is spellbinding! ~Cassandra Curtis, author of the Shifting Tides trilogy.

Morning sickness sucks. Which is why fashion designer turned amateur sleuth Maddie Springer has spent the last six weeks being a couch potato and Moonlight vampire movie devotee. But when Maddie's best friends finally convince her to venture out, Maddie stumbles on a dead body of a girl who has been bitten on the neck, and life suddenly imitates art in the most deadliest of ways. Now Maddie is smack in the middle of a murder investigation involving a deadly dance club and a coven of Hollywood "vampires". Not to mention navigating the world of baby showers, diaper genies and Lamaze classes with her LAPD Homicide detective husband who would rather his pregnant wife not continue popping up in his murder investigation.

Between the hormones, the homicides, and a flurry of fangs, Maddie and her gang work to track down the deadly truth... before the killer bites again!

Gemma's High Heels series will have you laughing and cheering for Maddie, one of the most delightful heroines ever written. Smart and witty, Fearless In High Heels is a keeper and a great addition to the series. ~Cassandra Curtis, author of the Shifting Tides trilogy.

She faked her death to escape life as an assassin. But now her enemies have tracked her down, and this time they want her to stay dead.

Anya Danielovich was a highly-trained killing machine in her former life. But that was a long time ago. Today she's just Anna Smith - a single, thirtysomething woman living in San Francisco with an undemanding day job, a loving, if dim-witted, dog, and a simple desire to lead a simple better life. But she's still haunted by her past - the people she killed, the mentor she betrayed, the woman she was. She's taken care to cover her tracks, but she's beginning to feel like she's being watched...

Nick Dade is a hired gunman, the best of the best. He's read Anya's file inside-out and, after weeks of surveillance, he's ready to pull the trigger...until someone else beats him to the punch. With his agenda shattered, Nick suddenly finds himself thrown together with the woman he's been sent to eliminate. Who is she really? Who hired the second hit? And who can he trust? Together Nick and Anna find themselves embroiled in a web of deceit and desire as an unknown enemy - one with dangerous ties to Anna's former life, and a present-day political assassination - closes in. To unravel the truth, Anna must face her past even if that means risking both Dade's life and her own...for good this time.

Posted by Cassandra at 11:08 AM No comments:

So very excited to let ya'll know that my novella Naughty Little Secrets is available now!

A guilty pleasure.
A wicked desire.
A lusty kink.
A hidden fetish.

Everyone has a few naughty little secrets. All of Stacie Purcell's secrets are in the red story binder she keeps in her messenger bag. An aspiring writer, Stacie dreams of the day her sexy stories will get published. But when she misplaces her binder, she is frantic, worried she'll never see it again. Desperate to get it back, she’s willing to do whatever it takes.

Tyler Murchison can't help noticing the cute little blond in his car repair shop's waiting room, her nose buried in her red binder. Closing up for the night, he discovers a not-so-innocent piece of paper and a mysterious messenger bag in the waiting room.

But can a single night of wild, passionate sex lead to something more?

Sample and Purchase link: http://www.smashwords.com/books/view/118880
Posted by Cassandra at 1:50 AM No comments:


Wishing all my friends and fans a very
Happy New Year!
Let's make 2012 the best year ever!
Posted by Cassandra at 12:00 AM No comments: