The Drawing for the Amulet & the Bonus Contests

All the entries were wadded into tiny balls and laid on the rug for Snowy, my American Shorthair cat to choose. She decided they might be food and tried to eat them. Since more than one made it into her mouth as a snack, I pulled them out and tried again. This time I decided to draw the winner myself. And although I was sorely tempted to chew on a few first, I managed to rein in my impulse. LOL

The first name drawn from the box and the winner of the amulet is….Rhonda Stapleton! Congratulations, Rhonda! Please email me with your snail addy and I will get your prize out to you asap.

The bonus contest: The person with the most entries wins a Sensual Scents gift box. The bonus contest winner is: a tie! According to my records, both Debbie and Jennifer each have 29 correct guesses! So each of you will win a gift set! Congratulations! Please email me with your snail addresses, too.

Thank you all for sharing a part of your day with me. I hope you all enjoyed the Symbols of Prophecy Contest and will tell your friends. More contests will be on the way.

All the Best,
Cassandra

Posted by Cassandra at 11:46 PM No comments:

One little sip…the nature of the Cup of Fate 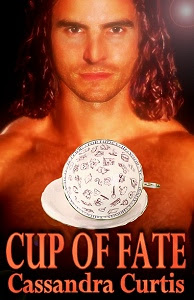 Bryn thought she was humoring her friend. Not turning her life inside out and upside down. Not playing into the hands of destiny–of fate…with one little sip.

The Cup of Fate is a special teacup, a magickal artifact that can transcend time and space, even dimensions for a select few. It alters the path of your life, creates a new future, especially for you.

Then it sends you on your way. There is no going back. And your life will never be the same again.
Many of you have come so close with your guesses. It does, in a sense tell you your future.

But more than that, it creates the path of your future, much like the cauldron of transformation and creation. And like the suitcase which depicts travel, it will send you where it wants you to be, whether you like it or not. :) It does not create the hero for you. Or you for the hero. And yet…it does act as matchmaker. It alters the path you were about to take, shifts it and sets you upon a new course with a none too gentle prod.

The Cup disturbs the calm and serene flow of space/time and dimension; transporting you to another realm where nothing is as it seems.

So, what exactly is the Cup of Fate? It is raw, limitless, ancient power, enchanted into a delicate, deceptively fragile-looking teacup. It also represents second chances, love eternal, harnessing the forces of nature, and the intelligence of the universe itself.

To read more about Cup of Fate, check out my website at www.cassandracurtis.com/books/cup-of-fate

Posted by Cassandra at 8:30 AM No comments:

What is The Cup of Fate?

In an earlier post, I asked you, based on the symbols (clues), to determine the mystery behind the Cup of Fate. You see, my heroine is trying to piece together a mystery of sorts, and to explain what she is trying to figure out, would give away part of the answer…lol

There is a real Cup of Fate…sorta. Some of the same symbols appear inside it…but I created and used new symbols to serve my story. So, while some of these symbols will seem familiar, many won’t. :)

But I thought you might like to take a peek at what started this entire thing and read a short interview about how I come up with some of my ideas.


One of the questions I’m asked most often is how I come up with ideas.

In the case of my fictional cup in Cup of Fate, it has a real counterpart. Honest. An online friend of mine in one of my yahoo groups, asked for my help one day. She had an heirloom teacup and saucer passed down from her great-aunt. The Cup had unusual symbols and drawings on the inside.

Knowing my penchant for collecting mysterious, arcane artifacts, she hoped I could shed some light on her unique possession.

I searched the internet, old antique china collector books, and asked around. I found the cup fascinating and during my search for the meanings behind each symbol, I began to ask the question that all fiction writers ask…what if?

What if you found something so curious and rare that it defied explanation? How would it cross your path, make itself known? What if it could foretell the future? Your future? What would it see? And what if it did much more than tell the future? What else might such an artifact–a thing of such immense power–do?

Ahh…now you understand why I had to write this story. It caught my imagination like nothing before and propelled me to seek answers.

As I started writing, the heroine pulled me into her story, made me a part of it. But ohh, I was jealous of her. After all, she got the hero. And what a hero! Did you get a look at him on my cover? Whoo-Ah! A feast for the eyes and the senses, my friends.

I hope you will enjoy Cup of Fate. Go ahead, take a sip…enter the fantasy…if you dare.

Posted by Cassandra at 12:01 AM No comments: