The Beauty and The Beast Trope in Romance

Anyone who hasn’t read Beauty and the Beast or a rendition of it, raise your hand.  Anyone?  I thought so.  If you’re hanging out here at my blog or on my FB author page, it’s probably a good guess you like this tale in its many forms as much as I do.


Basic premise of the story—hot girl falls for an anger management reject, ugly monster of a guy who isn’t really ugly. He’s just in disguise via a curse.  Love him enough and he changes back to his handsome self.  We end up with hot girl in love with hot prince of a guy. Happy ending for everyone.


Now let’s get to the blood and guts of the idea.  I have a bit of a problem with that short summation.  Why?  Well, let’s look at the origin of the curse.


The story as told by Villeneuve and de Beaumont vary in some details from each other, but I think most of us remember it as the Prince basically being an asshole to a poor old lady and not offering her shelter in story when she begged him.  If the idea of loving the beast who was actually a man didn’t hammer home the idea that looks can be deceiving, then you weren’t paying attention to this first volley.  The old lady isn’t just the average crone in rags.  A few choice words from her, some bad juju, and the prince is no longer God’s gift to the fairer (and ~cough~ superior  ~cough~) sex.  Lesson? Be careful who you piss off.


I’m good with this part.  It’s the not so subtle part of the story that says “Don’t be a dick.”  Now let’s get into the more tangled bit of it.  With time, maturity and bucket-loads of angst (love this stuff) the Beast/prince becomes a gentler, more empathetic being, possessing an internal beauty matched by the outer handsomeness he once had and lost due his cruelty and narcissism.  The reward for his redemption—and for Beauty’s exceptional discernment—is to change back to his handsome self.


Hey, I’d be the last person to say I can’t appreciate the physical beauty of anyone, man or woman.  I’d love to be a hot babe myself.  Still, after years of torment, of isolation and soul-searching, doesn’t being turned back into your hard body self seem a shallow reward for all that effort?  Or…is this really the prince’s reward?  Maybe it’s Beauty’s reward for seeing beyond the grotesque to the beauty within?  Personally, I think she gets the short end of the stick with this.  I’d be a little freaked out myself at having fallen in love with the ugly guy and suddenly be presented with some stranger before me, no matter how much of a babe he might be. I have more ideas about this, but I’m curious as to yours.  Care to share?


What if the Beast doesn’t change at the end (a la Shrek)?  Does the story lose its essence?  Its redemptive quality?  If so, how?  If not, why?


Last but not least, why do you think this tale has such huge appeal?  Its romanticism?  Its morality?  Its hope and acknowledgement that we can all find it within ourselves to be the Beast redeemed or Beauty with her gracious, far-seeing soul?
If you like the Beauty and the Beast romantic trope and have some book suggestions for me, please leave them in the comments. I’m going to be shoring up my TBR pile next week.
As always, In love and light...


Cass
Posted by Cassandra at 3:26 PM No comments:

Hey ya'll, I have some really awesome new releases to talk about. I personally love anthologies. Each story is a nice sized bite, just enough to see if you like the writing style and voice of each author. I have personally found a bunch of "new to me" authors I love this way. So I hope you'll give these nifty anthologies a chance and maybe you'll find your newest auto-buy author.


First up is Teeth, Long and Sharp: A Collection of Tales Sharp And Pointed. 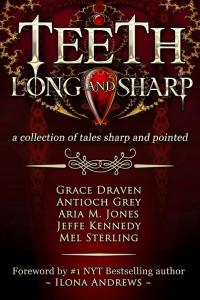 IVORIES by Aria M. Jones - Eleanor resents the afternoons sacrificed to piano lessons and a disagreeable teacher who gloats over her failures and humiliations. Today, it’s Mrs. Lundemann’s turn for a sacrifice of a very different nature…

NIGHT TIDE by Grace Draven - Something hunts the surf at night, luring villagers to their deaths with a lullaby of sorrow and the torture of nightmares. Blessed with the gift of water-sight, Zigana Imre senses the presence of an ancient predator possessing a taste for human flesh sweetened by grief. With the help of a child of earth, she will battle a spawn of the sea to protect a loved one and save a man who will one day save a world.

THE NOISE OF FUR by Jeffe Kennedy - The first time, it came at night…

In the forest, a Thing prowls, picking off members of young Raven’s tribe. If they flee their home, they face starvation. If only Raven can answer the question of what kind of fur makes that noise.

VENETRIX by Antioch Grey - A merchant and a poet come to the City, seeking justice for the murder of a relative, and if justice cannot be found, they will have revenge. They collude with vampires, negotiate with mermaids, share ale and meat pies with gargoyles and navigate the prisons, waterways and court system of a city ruled by a Master possessing long life and even longer teeth.

The City will make you a fortune, or it will kill you, but it will always change you.

THE VAMPIRES OF MULBERRY STREET by Aria M. Jones - Living the simple life in small town Indiana, Mrs. H has everything she could possibly ever want: a cozy house, peace and quiet, and a garden that is the envy of Mulberry Street. But when sinister outsiders disrupt the tranquility of her neighborhood, it might be time for her to come out of retirement and take up tools more deadly than pruning shears and a trowel.

VOICE OF THE KNIFE by Mel Sterling - Biologist Charles Napier doesn’t mind getting lost in a Florida swamp—it’s part of a scientist’s job. Logic and training will get him out safely. Except lurking in this swamp, there’s a monster Napier’s science can’t explain...a lonely, exquisite, desperate monster.


Next I have this delectable offering for all ya'll LOLCatz lovers... Meow wow! 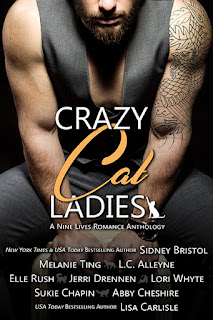 The Vet & the Geek, Sidney Bristol
When veterinarian Raul is reunited with his long lost cat he gets a lot more than he bargained for in Miranda, the curvy, sassy woman who can wipe the floor with his subpar gaming skills. But Miranda doesn’t know if Raul is flirting with her, or if he’s the stalker she’s lived in fear of for years. Is he the crazy cat guy of her dreams, or is he the man who wants her—dead or alive?

Mr. November, Melanie Ting
Marty Devonshire is the feared tough guy of the Vancouver Vice hockey team, yet he’s afraid to make a move on petite Elaine Salang. It will be up to the entire team—& Knightley the cat—to convince Marty to take a chance on love.

Cat Scratch Fever, L.C. Alleyne
Inspector Rafael Montigue detects the scent of a potential mate during a delegate meeting. Kristin Wallin is working undercover to bring down the Brazilian Minister’s drug ring. When terrorists attack, Rafe exposes his panther shifter identity in order to protect Kristin, but she surprises him with secrets of her own that make him look like an innocent kitty cat.

Decker & Joy: A North Pole Unlimited Romance, Elle Rush
Jaded P.I. Decker Harkness must track down a missing Christmas prototype if he wants a shot at a corporate security contract. Sexy cat shelter manager Joy McCall needs help figuring out who broke into Kitten Caboodle and made off with her foster kittens. If they work together, everyone may get a happily-ever-after.

Cats in the Cradle, Jerri Drennen
Being accused of murder by red-haired beauty Beatrice Dailey, a woman known to be the crazy cat lady in the neighborhood, somehow kick-starts Sam Littman's floundering career. Soon he finds himself writing her as the main character in his novel—but as fact & fiction start to blur, Sam & Beatrice tumble headfirst into something most unexpected.

Forgive Me, Lori Whyte
When a neighbor's cat deposits a severed finger on Rachel Connor's doorstep, the last thing she expects is that it'll bring Grady Randall back into her life. He shattered her heart when they were teenagers, but she finds herself turning to him when a menacing stranger shows up at her door. Can their reunion & reignited attraction survive the night or will the murderer strike again?

Sanctuary, Sukie Chapin
When Indiana finds her life is in shambles & her exotic cat sanctuary on the verge of bankruptcy, her only hope rests in the capable hands of a tall, dark, & bearded stranger. Jake’s on the hunt for the only good thing left in his life, his lost lion Loki, but he never expected his search to lead him to beautiful, anguished Indy & her dilapidated refuge. As their attraction grows fiercer than the lions they love, Indy & Jake must decide if they can overcome old wounds & fears to find sanctuary in each other’s arms.

Mr. Hot Stuff, Abby Cheshire
After eight awful & all too memorable blind dates in a row, all Lily wants is to stay home with a good book & her five cats. But when her latest rescue cat Captain Kitt goes klepto & steals a set of keys that belong to the hunky fireman in the neighborhood - Lily may be closer to a perfect match than she ever imagined.

Dress Blues, Lisa Carlisle
When Vivi Parker volunteers at a fundraiser for a cat shelter, she’s stunned to run into Jack Conroy, the one man she couldn’t have, but never forgot. While they served in the Marines, any relationship between them was off-limits. Years later in Boston, the rules have changed. But so have they.