Since I had kidney stones on my birthday and my guy had stomach flu at the same time, we decided to celebrate my birthday this last Sunday. He took me to see True Grit. Okay, it's a known fact I really don't like westerns. Not in books, movies, or video games. However, True Grit is a classic and it got rave reviews. Plus I had to see if Jeff Bridges could fill the rather big boots of John Wayne. He did. And then some. This may be the very first western I've ever liked. It came across as real and authentic. A true piece of Americana. I would recommend everyone see this movie—even people like me who don't like westerns. It's that good. 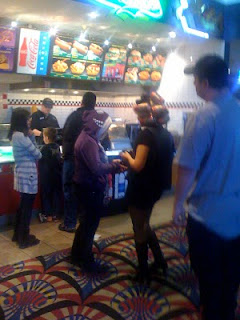 The theater we went to is this huge place with all sorts of maze-like hallways and dozens of theater rooms. Of course the movie was playing in the very last theater in the back. So I grabbed the seats while my guy got the popcorn and drinks. The line wrapped half-way across the lobby, it was unreal. On the way out, after the movie, we stopped by the concession to get our refills on popcorn and drinks, since at those prices you want to get your monies worth. It was while in the line that my guy snapped this pic of a young woman with what looked like giant curlers in her hair. On closer inspection, we realized they were coke cans. Honest. I hope this is not a new fad or trend among our youth. ::shakes head::

Although I did love her friend's jacket. Looks like a shark. lol. I may have to see if anyone in SL can make a jacket like that for me, since I am Cassandra Sharktooth in SL. :P

The coke cans are a Lady GaGa thing. Go to youtube and look up the video for Telephone.

Sheesh, stay at home and make a sandwich instead of going out with coke cans in your head.