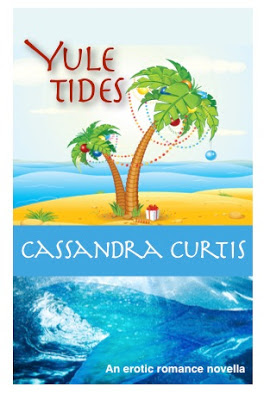 It takes a very 'special' Santa
to grant a mermaid's wish and dream come true.
This December, curl up with some tail smacking fun!


Merilee Bára Strand loves high heels, sexy stockings, and dancing the night away at some of Florida's hippest clubs. The one thing missing from her life though, is a man to share it with, and she does mean M-a-n. No way was she going to be stuck in the sea, tied to a tail-chasing merman. When she meets club owner Niels Maxwell, she decides Santa has granted her wish. Now if only her family's pesky bodyguard would give her the space she needs to seal the deal.

Soren Dane was once fully human, but the sea took him and gifted him with more. In return for saving his life, he guards the Norse Sea God Aegir's royal descendants. He never imagined his duty would cross paths with a sexy, albeit naive and foolhardy, blond mermaid determined to escape her palace under the sea and find a human mate.

No stranger to hazardous waters, Soren knows protecting Merilee from herself could destroy any chance he has to change her mind, and show her he's more than man enough to love.

Posted by Cassandra at 7:27 PM

A ton of thanks to my cover artist, Trula Peace Wyatt, who managed to brighten my day. Thank you sugar! Weee!

Thanks! I love the fun looking cover she did and am so excited. I sure hope readers will enjoy Merilee's love story.