Friday Finds: Back In Time, Ghosts and Time Travel 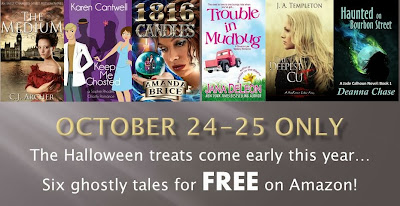 Do you believe in ghosts? I bet we can make you say “boo!”
Grab these six highly-rated ghost stories for free October 24-25 only on Amazon.

Scientist Maryse Robicheaux thought a lot of her problems had drifted away with her mother-in-law’s death. The woman was rude, pushy, and manipulative, and used her considerable wealth to run herd over the entire bayou town of Mudbug, Louisiana. Unfortunately, death doesn’t slow Helena one bit.

Sophie Rhodes has an interesting friend – a proper British ghost by the name of Marmaduke Dodsworth. Marmaduke keeps Sophie company, but she has eyes for her new boss, Dr. Callahan, who unfortunately has a spectral companion of his own – one with a nasty jealous streak. Love is in the air, but will it win out over the interference of two meddlesome ghosts?

Jade loves her new apartment – until a ghost joins her in the shower. When empath Jade Calhoun moves into an apartment about a strip bar on Bourbon Street, she expects life to get interesting. What she doesn’t count on is making friends with an exotic dancer, attracting a powerful spirit, and developing feelings for Kane, her sexy landlord.

A chance encounter during a costume ball at a historic tavern sends high school senior Lauren Harper back in time to early Americana. Now she’s experiencing the actual events of the “Legend of the Female Stranger” she’s heard her entire life growing up. Can she solve the mystery of this ghost, find her way back home…and deal with her own emotions when she falls in love with a guy who lived 200 years before her?

She can see dead people. He’s a ghost assigned by the Otherworld to return a demon. It should be a simple assignment, but they soon learn there’s nothing simple when a live girl and a dead boy fall in love.

Guilt-ridden over the belief that she’s somehow responsible for her mom’s death, sixteen-year-old Riley is desperate to see her mother’s elusive spirit to gain her forgiveness. When her father moves the family to Scotland so they can all start over, Riley believes her life couldn’t get worse – until the ghost of Ian MacKinnon catches her purposefully cutting herself. Riley believes her gift could help Ian end the curse that has kept him tied to the land for centuries, but the malevolent spirit of the woman who filled Ian returns and she’ll stop at nothing to keep Riley from helping Ian find eternal peace.