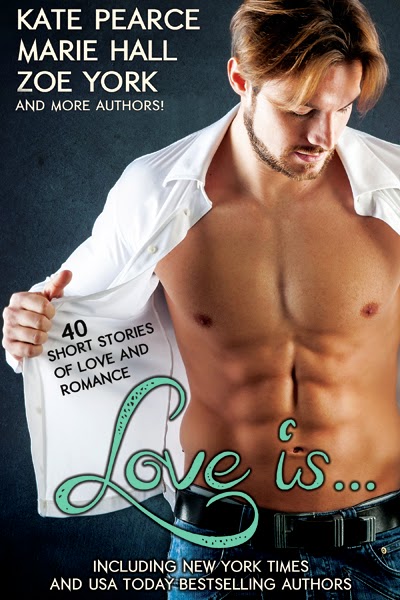 Happy Friday Finds! Today I'm featuring the awesome anthology, Love Is. For only .99¢ you get 40 stories of love, sweet to spicy to sexy to omg he did what? lol  So there is something for all romance preferences. Contemporary, Sci-fi/ Fantasy, and Historical. Heroes to make you swoon and heroines to cheer on as they get their man and their man gets them. *waggles eyebrows*

Love is... is now available on all vendors! Grab your copy now. Only 99 cents and all proceeds go to the literacy charity, Reach Out And Read.

~ Read on for a snippet excerpt from my short story in the anthology.

WHEN EVA GETS EVEN
by Cass Curtis

(Eva's side of the story)


Eva didn’t need a private detective. She could tail her clueless boyfriend easily enough by following the slime trail. Yeah, not fair, but then she wasn’t in the mood. Kevin had really screwed up when he’d asked her to help him find his car keys.
Oh, she’d found them all right. Inside the pocket of his jacket, along with a receipt from Reckless Risqué, the lingerie company that put the extra in marital and the va-va vroom in the bedroom.
It didn’t make sense, at least not at first. Why would Kevin buy something there? With her birthday months away, she didn’t expect he’d remember. The man personified absentmindedness. Likewise, he misunderstood the social niceties of life or at least appeared to. Then there was the simple fact that Reckless Risqué only went up to a size twelve. The fancy scrap of lace and satin wasn’t for her.
Which left the big question. If it wasn’t for her, then who?
The guy had forgotten their special date night twice because he was just too busy, but he could find time to buy sexy lingerie for some other woman. A horrible thought occurred to her—what if she was the girlfriend on the sly and the present was for his wife? She’d seen lots of made-for-TV movies and knew there were men who had more than one family and neither knew the other existed.
Such a crazy thought wouldn’t have crossed her mind a week ago. Love equaled trust and vice versa, or so she’d always imagined. Except trust flew out the window when you’ve found a receipt from Reckless Risqué in your man’s coat pocket.


(Kevin's side of the story)


Kendra wasn’t answering her phone and she wasn’t home. Kevin hadn’t planned on spending part of his day chasing after his baby sister, the five-fingered discount shopper. But this morning he’d opened his trunk to get something out and saw the RR bag. He’d completely forgotten about it.
Kevin knew he couldn’t pass it off as something he’d bought for Eva; anything that fit his beanpole of a sister wouldn’t fit his beautiful curvy girl. And he doubted they’d take a return and refund his money, not that he planned to try. The mere idea made him uncomfortable.
The last thing he needed was Eva accidentally finding the damn thing and getting the wrong impression.
For once in his life, he had something good and he wasn’t going to let anything or anyone jeopardize it.

To celebrate the anthology here on When Midnight Comes, I'm giving away a symbol of love and friendship, a lovely little heart ring.

As you can see, it's a size 7 (non adjustable). If you scroll down you'll see it can be worn as a pinkie ring (for those of us who have hands that swell (wait til you're over 50 and you'll see what I mean, lol) or can fit the ring finger. The tiny gems are "man-made" rubies and the ring is silver electroplated.

If you'd like to win this cute little "Love Is" ring, comment on my post here and either tell me your favorite story so far in the anthology (if you've bought it), and if you haven't bought it yet, tell me how you found out about the anthology (Twitter, Facebook,  friend, one of the authors, etc). 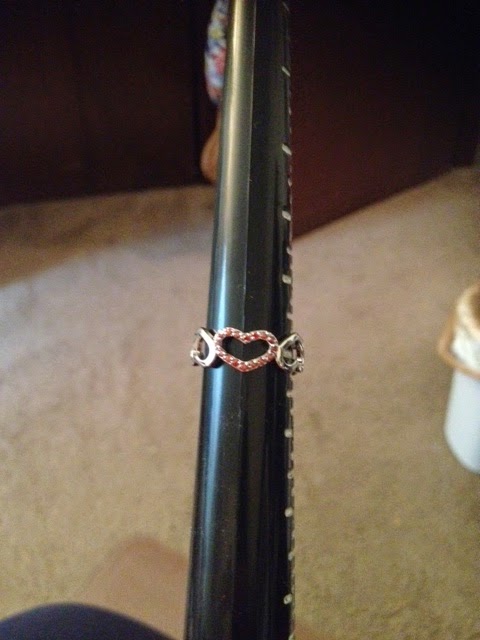 Must be 18+ to enter. The odds of winning depend upon the number of participants. Contest void where prohibited by law. It is the participant’s responsibility to check the blog to see if their name is announced as a winner, and contact Cassandra Curtis.com in order to claim the prize. Prizes must be claimed within 30 days of contest winning announcement. If not claimed within 30 days, the prize will either be added to another contest, or a second chance drawing at my discretion. Not responsible for lost/stolen mail.
Posted by Cassandra at 12:00 AM

I have not as yet read this anthology. I just found about it now with your blog. Aren't blogs wonderful??
debby236 at gmail dot com

Have not read it yet and found out about it on Facebook.

I haven't bought it yet because I just read about it on your Facebook post. With the mix of stories and authors there's going to be something for everyone in this anthology. suz2(at)cox(dot)net

I haven't read any stories yet because I just purchased the anthology this morning. I had fun during the Love Is author party and appreciate you continuing to share the love!
Anjeanette

I have yet to read the book but now that I know about it I plan to read it
. I learned about it on Facebook.
jwisley8@me.com

Awesome, I think I saw you at the party the other night. It was pretty wild there for a while. lol Good luck!

Awesome seeing you here, Anjeanette. That party was a blast. Had so much fun chatting with readers. Good Luck.

Hi Joy, I hope you made it to the party on Facebook the other night. Wait til you read it, I think you find a few awesome new to you authors to start reading. Good Luck!