I love paranormal romance, but sometimes I wish the stories had more ass kicking in them, ya know? More wicked moves, with a bad ass heroine I can cheer for... enter the Descent Series from S.M. Reine.


Catch it while it's free, people. 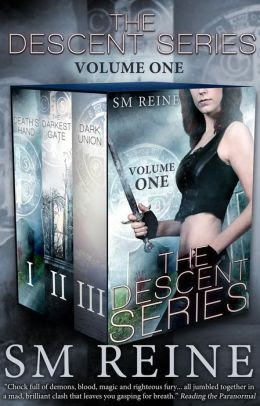 She was destined to be a weapon. Elise Kavanagh is good at one thing: killing demons, angels, and gods. For years, she was the death that supernatural creatures feared. More myth than woman, she walked the Earth as the embodiment of vengeance.
But Elise doesn't want anything to do with destiny. She wants time off to spend with her only friend and former investigative partner, James Faulkner - a powerful witch, the only person she trusts - and try to be a normal person, whatever that means.

Destiny hasn't forgotten her. It's not easy to retire when you were born to be a killing machine. Old enemies still hold bitter grudges against Elise. The demon overlord of her new home isn't happy to have the Godslayer hiding out in her territory. And there are still gods that need to be killed...
This is a collection of the first three titles in The Descent Series, which are gritty urban fantasy books about an exorcist, a witch, and their battles against the forces of Heaven and Hell. (Approx. 200,000 words total.)

DEATH'S HAND
Elise Kavanagh doesn't want to hunt demons anymore. It's been five years since she killed her last enemy, and life has been quiet since then. She went to college. Got a job, and then lost it. Made a friend or two. Lived a normal life. Now her former partner, a powerful witch named James Faulkner, wants Elise to fight one more time. The daughter of a coven member has been possessed, and Elise is the only exorcist nearby.

Becoming a hero again would mean risking discovery by old enemies. But digging into the case reveals that it might already be too late--bodies are disappearing, demons slither through the night, and the cogs of apocalypse are beginning to turn. Some enemies aren't willing to let the secrets of the past stay dead...

THE DARKEST GATE
When Elise Kavanagh retired from demon hunting, she swore it would be permanent. But an attack from a powerful necromancer forced her back into the business, and now she's trying to balance her normal boyfriend and normal job with everything supernatural.

Mr. Black is a demon hunter gone rogue. He's enslaving angels and stealing ethereal artifacts in pursuit of forbidden immortality, and an old grudge drives him to make his final stand in Elise's territory. Destroying her life and killing her friends isn't the goal, but it's a definite perk.

A demonic overlord offers to join against Mr. Black and protect Elise's loved ones. All she needs to do is ally with the demons she's sworn to kill, at the cost of her morals--and maybe her immortal soul. But once she crosses that line, there's no turning back.

Nothing is sacred when Heaven and Hell collide on Earth...

DARK UNION
Every fifty years, the most powerful ethereal and infernal beings convene on Earth to resolve conflicts with mediation by kopides--humans born to police relations between Heaven and Hell. They're meeting in Elise Kavanagh's territory this year, and she used to be the greatest kopis in the world. But she's not invited.

An old friend, Lucas McIntyre, asks her to attend the summit in his place. But when she arrives, she discovers that a human faction called The Union has taken charge of the summit, and they're not playing nice. Worse yet, someone has killed a prominent Union member... and now they're demanding blood.

Posted by Cassandra at 1:00 PM