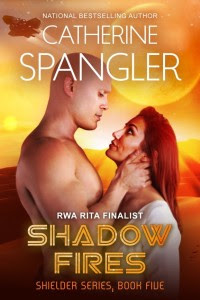 Jenna dan Aron, a Shielder, lives a solitary existence, shunned by her people because she has visions and can see the future. She’s even foreseen her own destiny: to be a human offering, a mate for a savage Leor warlord.

When two Shielder colonies need to be rescued, the Leors who are their only hope demand a bride for their leader in return. Knowing she can’t deny fate, Jenna steps forward.

The Leors are a hybrid race and only part human. Arion of Saura finds mating outside his race abhorrent, but he has no choice, as his kind faces extinction. His life is ruled by hard logic and physical prowess, with no room for softness or emotion. Bound to him, Jenna faces a life of barbarism with a mate who seems more beast than man. In the relentless heat of the wild Sauran desert, Jenna and Arion wage a battle of wills, until they discover that the heart is mightier than any weapon—and that love can forge shadow and fire together.

I've long been a fan of the Shielder series from Ms. Spangler, so my expectations were pretty high.


I read the first page with my fingers crossed that I wouldn't be disappointed, and I wasn't. With incredibly deft handling, Ms. Spangler managed to make the reader feel every emotion Jenna had, all the worry, trepidation, and the sadness. Once on Saura, Jenna had to battle her dislike and mistrust, but you could see the budding romance to come, all in the subtle details. Each chapter moved the story forward, providing glimpses into each of the main character's state of mind.

The hero, Arion is formidable at first, even a little scary in true alpha fashion, but soon we learn he's made of more than sheer muscle and arrogance.

I won't give away spoilers, but I can promise lovers of SFR and Ms. Spangler will cheer when they finish Shadow Fires. I know I did. Is it too early to rub my hands together in anticipation for book six in the series?* ;)


*Please note that an ARC of this book was provided free of cost for review, but in no way influences my opinion. Honestly, few things do. Just ask Bear. lol 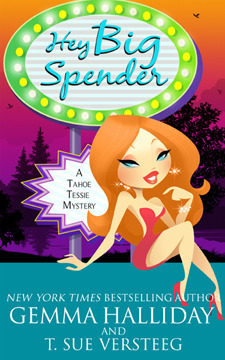 When Tessie King inherited the Royal Palace Hotel, Lake Tahoe's biggest resort, she inherited a cranky board of directors along with it. A board that is demanding higher revenues, or Tessie's out. Faced with the possibility of losing her father's legacy, Tessie turns to her staff to help her come up with a plan: film the season finale of Battle Buffet, the hottest cooking competition show on TV, at the resort. It's a scheme sure to bring in the big bucks.

But is also brings big trouble. When one of the casino's wealthiest clients is found dead on the gaming floor, and the killer comes up incognito on the security footage, everyone is a suspect—from the television crew to the blue haired retirees at the slots. Tessie teams up with her stepmother-turned-BFF and her snowboarding teenage crush in a race against the clock to repair the casino's reputation, dodge mob accusations from the hot FBI agent on the case, and track down a killer before any more of her big spenders end up sleeping with the fishes.


Love the Tahoe Tessie series and have Hey Big Spender on order. The book sounds like my kind of fun whodunnit romp.