My 34/60 challenge continues as I whittle down the pile.  Just finished Dark Stranger by Susan Sizemore. I am a very quirky type of reader, so what I love or like isn't always what everyone else adores. Keeping that in mind, I have to risk saying that I thought Dark Stranger was the best Susan Sizemore book I've read in a long time. It's got a terrific twist, engaging characters with actual depth to them, and a kick-ass premise that Ms. Sizemore delivers on. The thing is, I preferred her "book in a book" to all the books in her actual series combined. I'd love to read the sequel to this story. 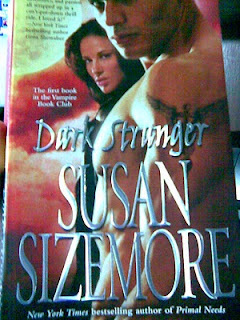 A twist of fate made Zoe Pappas heir to the Byzant throne. Bound by duty and devotion to keep the Empire safe, Zoe is captured while on a secret diplomatic mission and sent to an underground prisoner-of-war camp. In this strange, shadowy place, residents are governed by fellow inmate General Matthias "Doc" Raven, whose powerful magnetism rouses an urgent desire in Zoe. But the intensity of her attraction is matched by her surprise at discovering that Doc has a secret of his own: he is a vampire.

Zoe's presence puts everyone in the camp in danger. Doc knows it, and knows too that Zoe's royal status makes it impossible for her to bond with a vampire. The only way to save her is to help her escape, and lose her forever. But some fires are impossible to quench, even when following your heart is the ultimate taboo....