My 34/60 Challenge: Katrina: The Beginning by Elizabeth Loraine 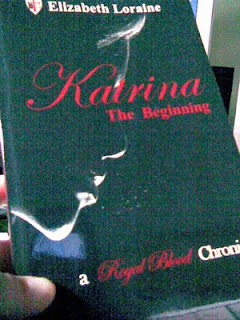 As a Vampire being hunted was nothing new.
Finding out that I had to save those that were hunting us was!
Katrina, a young royal blood vampire, chronicles her story from the 1800's when she was seventeen forward in the series Royal Blood Chronicles. She has received extensive training in sword play and self defense at the insistence of her father Fredrik. Now she understands why.

Katrina is thrust into something she never could have imagined growing up in the aristocracy of Europe. Once the fashion of the day and girlish gossip filled Katrina and her new friends days, but their lives changed the instant their race was threatened and they were chosen as the Five, the protectors of not only the vampire race, but all the peaceful races of the world!

What did you think of the book?